It’s amazing how quickly the time flies. A half a year has already gone by and the Fourth of July is upon us once again. Funny, it never seemed to go as quickly when I was younger. I can recall waiting for the holidays and it seemed to take forever before they materialized. I suppose the first holiday of the year that I enjoyed the most was the fourth of July. Not because there were firecrackers and noise, I still can’t stand that part, but I always liked getting to hold the sparklers in the evening outside our tenement. It was the one time I remember my parents being “outside” with me. There we would be standing outside the tenement on seventh avenue in Park Slope, all our neighbors joining in. Some would light the firecrackers in the “gutter” while most of us got to twirl those sparklers as our parents lit them. I can recall making sure to get the “punks” earlier in the day at the neighborhood candy store. The punks (something along the line of incense) would keep the light from one match and light up our sparklers best of all. The only part I didn’t enjoy was when the sparks from the sparklers would throw out the sparks that would land on my hands and arms and cause me to feel a tiny little burning sensation.  It was really nothing and never left a mark, but I would fuss because secretly they scared me somewhat.  My favorite part was the fourth of July food.  We always managed to have hot dogs and corn on the cob and watermelon and italian ices from our local pizza place.  All among my favorites as a child.

There was one incident I remember as a very small child where I did something so horrific that when I think about it today, I cringe.  After the fourth of July ended, I had to be around seven years old at the time, I found a hidden stash of sparklers in our apartment.  So I decided to light one inside the house.  I snuck into my brother’s room which was the tiniest room in the apartment and lit a sparkler with my mother’s matchbook.  Well it was stinging my hand a lot so I got really frightened and decided to throw the sparkler out the window, thinking to myself that by the time it got to the ground it would die out.  You see we lived on the top floor of a tenement above a store on seventh avenue at the time, so it had a long way to fall and blow out.  The only problem was that the window in the bedroom was connected by an “airshaft” meaning it was the portion of the tenement where the row of tenements were connected and down below there were papers and other paraphernalia which had been blown there.  Well that sparkler did not burn out, instead it caught fire to the papers that were at the bottom of the air shaft. Luckily for me the janitor in the building saw the smoke right away and doused the fire from the sparkler.  My Guardian Angel or the Universe or something had to be watching out for me that day because a  tragedy was avoided.  I did however, get severely punished and rightfully so, when the janitor came banging on our door wanting to know who threw the lit sparkler from the window.  I tried to deny it, but I never could keep my face from showing the truth and was found out.  From that day till this I have never touched nor lit a sparkler or any firework.  As a matter of fact, I truly don’t enjoy any type of fireworks anymore.  It just reminds me of a war zone.

As a matter of fact, it does amuse me when I see how excited children and adults get when they see the lights in the sky.  I often wonder what the beauty is in them.  I have tried to keep an open mind and enjoy the sight, but deep down it just doesn’t appeal to me in the slightest.  Perhaps my distaste stems from my associated punishment or from those tiny burning sensations, but whatever the reason, I will just keep “oohing and aching” with the rest of the world at the Fourth of July fireworks and be grateful that I am alive to see another year and another holiday pass by so quickly.  Most of all, I will keep looking forward to the current day celebration where there will be hot dogs, watermelon, corn on the cob and maybe even Italian ices to enjoy!

Happy Fourth of July everyone! 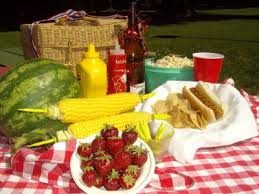 And that is the “Way I See It” here in Brooklyn.

Won't you tell me what you think? Cancel reply

As an average, American born woman I've decided to write and share my thoughts and beliefs in a blog. This blog will be very simple and hopefully click with the rest of the people out there, who feel as I do, but just can't express it with words, on a variety of subjects. I'm not a researcher. I'm not a scholar. I'm not anything other than an average American who has opinions about a multitude of issues and I'm tired of holding them inside myself and bending the ears of my family and close personal friends. I'm not claiming I'll always get it "right". I'm not claiming any political or religious affiliations. What I am claiming is my privilege as an American to exude free speech. I will be honest, straightforward and probably extremely wordy. At times I may share my own photos or my own recipes or just my own gripes, but most times I will attempt to share how my peers feel about current issues and why my generation of friends and acquaintances can't grasp society's lack of common sense today. I may unintentionally offend people, I will absolutely make mistakes and errors because I am first and foremost a human being and we all know no one is perfect. I most likely will never have facts and figures and I mean NEVER. This blog will totally express how I see things and I expect there will be plenty of counter opinions and possible argumentative theories about what I will express so I will respect that and accept it as my risk for writing this blog. Just having the option in this great country of ours to create a blog, is to me a privilege I would defend to the end!